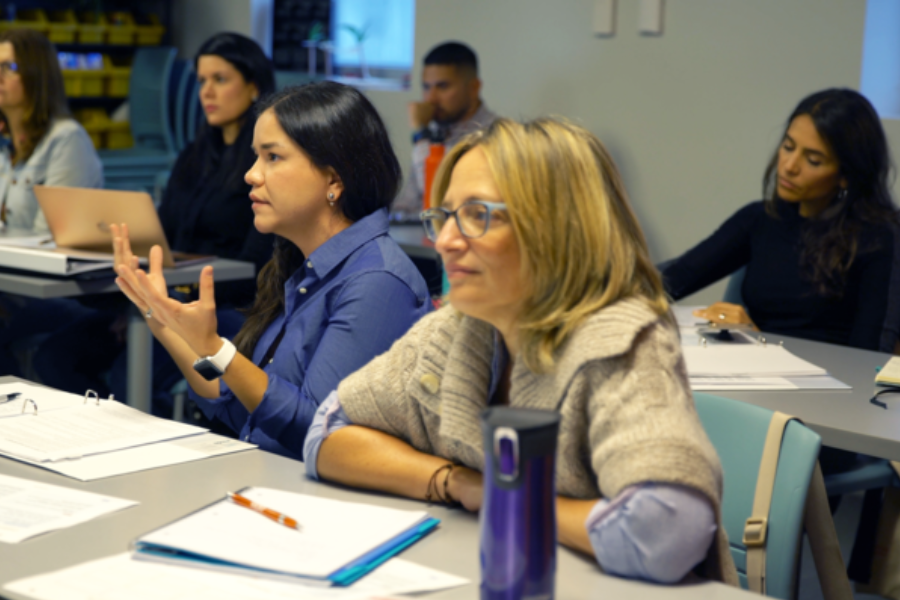 Of all the problems immigrants need to solve when they settle in the U.S., Yllis Hernandez faced the kind that so often leads to a business.

"Back in Venezuela, all my family, everybody brought the cakes for the parties,” Hernandez recalls. “But when I came here I don’t have any family to do that.”

Hernandez, who lives in Aventura, is actually describing the birth of her cake business – which helps her immigrant family stay financially afloat in South Florida.

“So I started to create cakes,” says Hernandez. “And a friend told me, ‘You have talent. That is amazing.’ And she started to order cakes for herself and her friends. And that is the way I started.”

It’s the way so many small businesses start – especially immigrant businesses. Hernandez’s custom-decorated cakes have even been featured on Despierta América, the morning show of the Spanish-language network Univision, based in Doral.

But Hernandez wants to parlay the success of that informal business, which she runs out of her home, into a more formal company with real bakery space. That requires entrepreneurial training – from customer service to company finance – that she and most women didn’t have access to in Venezuela.

“We didn’t have that support,” says Hernandez. “Nobody told me that my skills, my talent, that you can transform [them] into something bigger – you can create money or you can create a business.”

So each Tuesday this fall Hernandez comes to Miami-Dade College’s downtown campus, to its Idea Center. She and some 20 other Venezuelan immigrant women were selected for a program that teaches them to be entrepreneurs. It’s called FOCUS: Mujeres Emprendedoras, or Women Entrepreneurs, run in partnership with the Cisneros Group, a Venezuelan corporation now based in Coral Gables.

Cisneros actually started the project more than a decade ago in Venezuela, “and we decided, given the migration of Venezuelans to Miami, to pilot this effort here in Miami with Venezuelan [immigrant] women,” says Maria Ignacia Arcaya, Cisneros’ senior vice president for social impact.

That Venezuelan migration she’s talking about is major: As more and more people keep fleeing Venezuela’s catastrophic economic collapse, Florida’s Venezuelan population has roughly doubled over the past decade to more than 200,000. And just as female income generation is crucial for families trying to survive the humanitarian crisis in Venezuela, Arcaya argues it’s key for immigrant families here as well.

“In a lot of these cases these women were not entrepreneurs or business owners in Venezuela,” she says – pointing out that even women who were doctors or lawyers back in Venezuela can’t practice those professions once they arrive in the U.S. and have to find different careers.

“That’s part of having to reinvent themselves in another country.”

Much of that reinvention is cultural – especially being more business-assertive in ways that are still rarely encouraged for women back in Latin America. Julio Cañas, who is also Venezuelan, is a finance instructor for the program.

“They come from Venezuela believing that they need to be empowered,” says Venezuelan-born Julio Cañas, one of the program’s instructors. “So basically they need to realize that here the soil is more fertile for their ideas to thrive.”

Venezuelan program participants like Glenda Travieso say that’s dawning on them as they learn how drastically different the U.S. business arena is compared to Latin America’s.

“Here it’s more easy because you can [start] a company in three days” compared to three months in many Latin American countries, says Travieso – who did try to run her own women’s lingerie business back in Valencia, Venezuela, but got so worn down by the country’s economic disaster and the obstacles for female entrepreneurs “that I found I had depression.”

Then, she says, her clinical depression got a little relief.

“My husband and me win the lottery” in Venezuela, she says, laughing. “Yes!”

With their lottery winnings they immigrated to Tamarac, Florida, and Travieso has started a life coach business, complete with a book, webinars and conferences, to help other immigrants deal with depression.

And Travieso is starting another venture: importing a more affordable breast prosthesis for mastectomy patients. It was created by a woman entrepreneur she knows back in Venezuela – who is an alumna of the Cisneros program there.

“Here we need to keep moving forward in order to leave our comfort zones,” Travieso says.

One important comfort zone the venezolanas are leaving is language. The Miami-Dade College classes are taught in English only – a reminder the women need to engage customers outside their immigrant enclaves.

Another issue the Mujeres Emprendedoras program creators wrestled with was whether to include non-Venezuelan immigrant women in the mix. In the end they decided to keep it Venezuelan in order to elevate the sense of group support they felt the women would need. But program manager Gustavo Grande says the MDC Ideas Center’s larger intent is to spawn similar programs – and corporate sponsorship like Cisneros’ – for other immigrant communities.

That’s especially important, Grande adds, since women and immigrants are the fastest growing entrepreneur cohorts in the U.S. (70 percent and 120 percent increases in their numbers since 2016, according to the center’s research).

“This is a call for corporations to support immigrant women entrepreneurs when we know they represent a huge increase in the economy,” says Grande.

Carolina Piña, a program coordinator, says women entrepreneurs also tend to be particularly strong role models. “Women, immigrants and entrepreneurs all have one important thing in common,” says Piña. “Resilience.” As a result, she says, women business owners “are especially good mentors in these communities.”

The program’s students may not be small enterprise experts yet – but they do know that larger economic impact their startups can have makes eminent business sense.