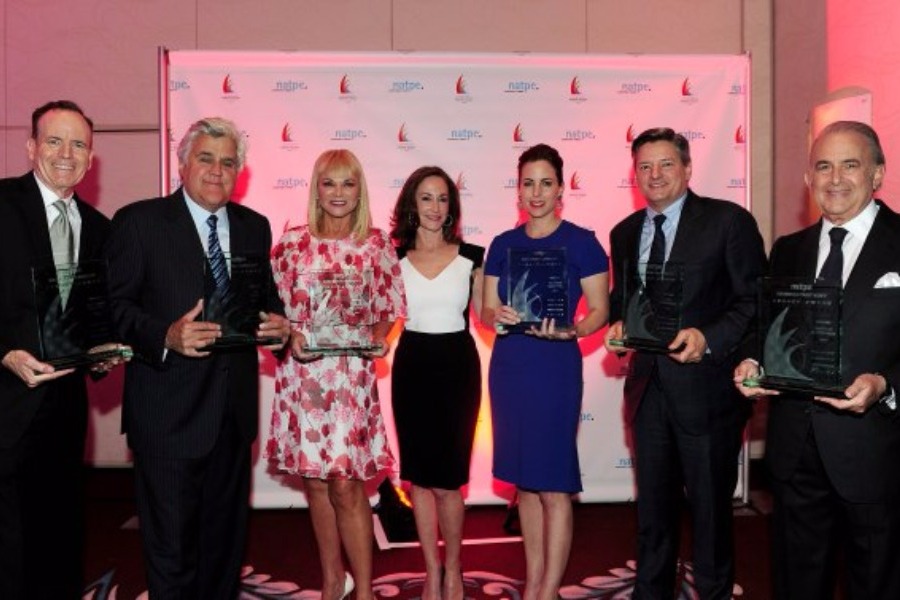 Jonathan Murray grew up in Syracuse scrutinizing TV schedules. Linda Bell Blue got her big break at KPIX-TV in San Francisco. Ted Sarandos collected TV Guide fall preview issues as kid in Phoenix. And Gustavo and Adriana Cisneros were practically raised in the TV company founded in Venezuela in 1951 by their father and grandfather, respectively.

The 2015 Brandon Tartikoff Award winners came from different backgrounds, but one thing they all have in common is a love of television that borders on obsessive, just like the award’s namesake. The Tartikoff trophies were handed out Wednesday night as part of the NATPE confab at the Fontainebleau Hotel.

Jay Leno, another honoree, noted that the spark to pursue a career in comedy came to him when he saw his first-ever comedian, Bernie Allen, at the Fontainebleau’s Boom Boom Room at the age of 12. His mother pulled him out after one joke because she thought the material was risqué.

Sarandos, Netflix’s chief content officer, was overwhelmed to be on stage receiving the kudo as Norman Lear, Vince Gilligan and Mitch Hurwitz sat clapping at a table nearby. “It’s hard for me to put some of this in perspective,” Sarandos said. He told the crowd about his TV Guide collection, and then confessed to having stolen a framed copy of an “All in the Family” cover when he stumbled in to TV Guide’s Phoenix sales office one day.

Citing the legacy of Brandon Tartikoff and Grant Tinker at NBC in the 1980s, Sarandos gave credit to his boss, Netflix founder and CEO Reed Hastings. “He’s my Grant Tinker. He’s given us room to succeed and fail and take big bets,” he said.

Bell Blue’s cheering section included Bill Applegate, the former KPIX-TV g.m. who gave her the news producing job that would lead her to a 19-year run as exec producer of “Entertainment Tonight.”

“Brandon found great joy in our business, and so do I,” she said.

Murray was hailed as a pioneer reality producer and a mentor to the contemporary crop of producers who came up through “The Real World” and other Bunim-Murray Prods. shows. He recalled his early years as a news producer and program director in Rochester, N.Y. before moving into production with his late partner Mary-Ellis Bunim.

“There’s nothing more thrilling than getting a 22-episode order in the room,” he said.

Leno got a standing ovation from a crowd that appreciates stability in a time slot, as he provided for most of his 22 years on “The Tonight Show” even as NBC was anything but stable.

“In the 22 years I was there I served under 14 network presidents,” Leno marveled. “Certainly (Tartikoff) was the George Washington of all of them. He was the father of our country.”

[Link to the original article.]