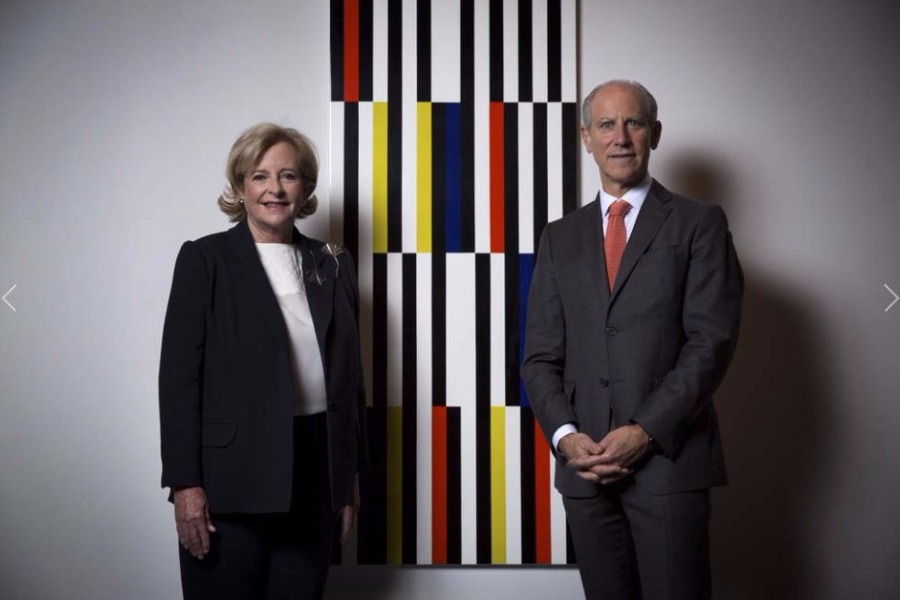 Before Lygia Clark was getting major museum retrospectives; before Adriana Varejão was represented by leading galleries; before Beatriz Milhazes was achieving high prices at auction, Patricia Phelps de Cisneros was collecting Latin American art, filling the walls of her home with Modernist abstraction and contemporary works by artists from Brazil, Venezuela, Argentina and Uruguay.

Over the last 16 years, Cisneros and her husband, Gustavo A. Cisneros, have donated 40 of these pieces to the Museum of Modern Art, where she has served on the board since 1992. Now, they are giving 102 more and establishing a research institute at the museum for the study of Latin American art.

“This is a transformative gift,” Glenn D. Lowry, the museum’s director, said in a joint interview with Patricia Cisneros at his office on Friday. “It comes fully developed.”

The donation includes artists who were working on abstraction during the middle and second half of the 20th century, such as Hélio Oiticica, Lygia Pape, Jesús Rafael Soto and Tomás Maldonado. Of the 37 artists whose works are included in the most recent gift, 21 are entering MoMA’s collection for the first time.

Cisneros offered MoMA its pick out of her home collection, as long as the museum, in addition to displaying the pieces, would regularly loan the works to other institutions, Lowry said.

Cisneros did not part easily with the selections she and her husband — a member of the Cisneros family that made its multibillion-dollar fortune in Latin American media — have been living with for 40 years.

“She said, ‘You’re taking everything in my living room,’” Lowry recalled.

A piece by Willys de Castro, for example, enjoys pride of place in Cisneros’ study. “Did we dare to ask for that picture?” Lowry said. “It’s like taking the centerpiece from a room.”

Essential to the mission of the Colección Patricia Phelps de Cisneros is bringing public and scholarly attention to Latin American work and ensuring its place in the pantheon of modern art.

“My big frustration in Latin America is, we’ve always been on the back burner in many areas, certainly in art,” Cisneros added. “It was one of the great centers of Modernism in the ‘50s, yet hasn’t been taken into account.”

The Patricia Phelps de Cisneros Research Institute for the Study of Art from Latin America — to be located on MoMA’s Midtown Manhattan campus — will offer colloquia, fellowships, publications and scholarly conferences.

The Cisneros study center is not alone in its efforts. The International Center for the Arts of the Americas at the Museum of Fine Arts in Houston has devoted 15 years and more than $50 million to initiatives in 20th-century Latin American and Latino art. A principal focus of the International Center is a digital archive for some 10,000 documents in the field. There will also eventually be digital archives at the Modern’s institute.

MoMA’s history of collecting, exhibiting and studying the art and artists of the region dates back to 1931, and Cisneros said the original vision of Alfred H. Barr Jr., the first director of the Modern, included Latin American art. The Cisneros gift joins more than 5,000 works by artists from Latin America.

But 142 works do more than just add to the museum’s holdings, those involved said; they affirm how much more integral to MoMA’s overall program Latin American art has become. Works by artists now show up in all sorts of exhibitions at the museum, and are lent to other museums around the country.

“There are many more works hanging seamlessly,” Cisneros said. “Curators are traveling to Latin America.”

“I think that part of the battle has been won,” Cisneros added. “It’s taken 30 years, but now museums all over the world are taking Latin America into consideration.”